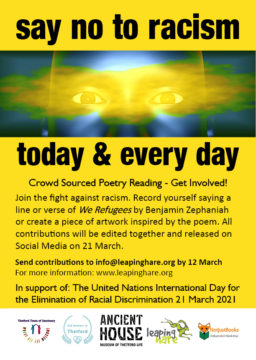 Contributors are being sought to collaborate on recording a famous poem, to mark the UN International Day for the Elimination of Racial Discrimination. To take part in the project, you need to read a single line of ‘We Refugees’ by Benjamin Zephaniah, which will be edited together and shared on 21st March 2021.

Ancient House museum in Thetford is working in partnership with Thetford Town of Sanctuary, Norfolk Museums of Sanctuary, Leaping Hare and Aid Matters UK to run this digital project and will offer five virtual free events around the day itself.

Melissa Hawker, Western Area Learning Officer, says: “We’d love local school pupils, families, groups and individuals to join the museum in the fight against racism by either recording themselves saying a line or verse of We Refugees or creating an art work inspired by the poem and sending it to us. We’ll be editing all the contributions together for release on 21 March 2021 via social media to make what we think will be a positive and powerful community message against racism.”

Margaret Dewsbury, Cabinet Member for Communities, says: “The UN’s International Day for the Elimination of Racial Discrimination provides an opportunity to reflect on the challenges presented by racism and contribute positively to change. We hope that many people in our diverse communities will join in with this digital project and families will also enjoy the special programme of online events. Opposing racism in all its forms is a key priority for Norfolk County Council and we’re delighted our museums are providing creative and engaging ways to promote tolerance and understanding of different cultures.”

Recordings and artwork should be sent to: [email protected] by 12 March. By sending in a contribution you are giving permission for the piece to be used online for this purpose. The poem can be viewed here:

Alongside this digital project, Ancient House is thrilled to offer a series of family events exploring multicultural themes.

On Friday 19 March at 10.30am they Ancient House will be sharing the Caldecott Medal winning The Snowy Day by Ezra Jack Keats. It features Peter, an African American boy, who explores his neighbourhood after the season’s first snowfall. The book was notable when it was published for avoiding negative stereotypes. The author received fan letters from numerous African American activists, educators, and children who included their own collage artwork. One teacher told Keats that, for the first time, she watched as children selected brown crayons for their self-portraits. Today we know that children of colour are still under-represented in picture booked today. In 2019 only 10% of children’s books published included a Black, Asian or minority ethnic character.

On Sunday 21 March at 10.30am Ancient House is teaming up the team at Gressenhall Farm and Workhouse to explore the experience of traveller communities in Norfolk through the book The Lost Homework by Richard O’Neill. Sonny devotes his weekend to helping his neighbours and fellow Travellers with a variety of tasks. He uses many skills, from calculating the amount of fuel needed for a journey, to restoring a caravan. In fact, the only thing he doesn’t do over the weekend is his homework – his workbook is missing! What will his teacher say?

On Friday 26 March at 10.30am Ancient House is teaming up with Lynn Museum and Stories of Lynn to explore Norfolk’s connections with Canada through the story of A Salmon for Simon by Betty Waterton. Simon is a young Canadian boy who lives near the Pacific Ocean. He enjoys digging for clams and fishing, and he hopes one day, to catch himself a salmon. However, just as his wish nearly comes true, he finds that he has changed his mind and has a big problem to solve. After the story children can learn how to create their own colourful, watery fish scene with wax crayons and water colour paints.

The museum is also exploring historical migrants to Thetford through two Quiz a Character events. On 18 March at 10.30am visitors can meet Maggie the Munitionette from the First World War. She is working hard for the war effort making munitions at the Charles Burrell Works. Find out about this dangerous work and the doctor who looked after her when she was injured – Dr Minns. He was also the first Black mayor in Britain. And on 22 March visitors can question Mary Jane, a servant at Elveden Hall working for Maharajah Duleep Singh.

All the events will be running via Zoom webinar and can be booked for free here.

You can reach us via email at: [email protected]